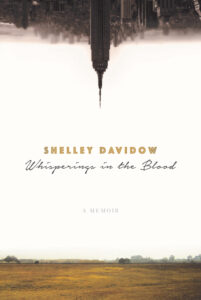 With the upcoming release of my biographical memoir Whisperings in the Blood (UQP 2016), I think with compassion of the millions of people all over the world who are compelled to leave the land they are born in and search for new homes. If this book does one thing only, I hope it will illicit empathy for the immigrant experience.

All of us have immigrant blood. So many of us have been refugees of one kind or another. We are born into a certain time, in a certain country, and our births are accidents of fate. Most of us crave safety and the chance to live without constant fear, and so when we find ourselves growing up on volatile soil, we are propelled to run, to find safe havens. When my great-grand-father fled Lithuania around 1913, he escaped poverty and life-threatening persecution. But when he arrived in America, he spoke little English. He struggled to make a living.

He became once again, an invisible person living on the edge. When his daughter Bertha was ten, his wife Ethel died of pneumonia, and Bertha and her brother grew up in the Jewish Orphan Home in Ohio. She had nowhere to go when she reached the age of 16. No relatives would take her in. She had no money and she hadn’t even finished high school. So when a marriage proposal from a stranger in South Africa came her way, she said yes. She had nothing to lose. She hoped, as so many of us do, that somewhere out there she would find home. It seems that my family has been making immigrant journeys for the past hundred years, restlessly propelled in a transgenerational search for home. If I could express one overwhelming thought it would be this: we are one human race. We have the same dreams, the same fears. We are not separate groups of ‘us’ and ‘them’.

​Our mirror neurons react exquisitely when we are confronted with other human experiences of pain and trauma. We are each other and we know each others’ experience. It’s only when we are damaged that we fail to see ourselves reflected back in the faces of refugees, immigrants and people who have arrived and will always arrive from ‘somewhere else.’